A skateboarding memoir by CurtisTappenden

Skateboarding suddenly broke like a mighty wave over our pavements! I was young, impressionable and hungry for excitement. It was 1977, and in the previous year the UK had experienced an unusually long, arid, summer drought, but in ‘77 our holidays were punctuated with an array of fluidly, colourful celebrations: The Queen’s Silver Jubilee, the birth of Punk Rock and the sublimely cool influences of Venice Beach, California. Skateboarding arrived via Dogtown, and it was all about style- sidewalk surfing- the innovations of dry, winter practice when the seas were too rough to ride. 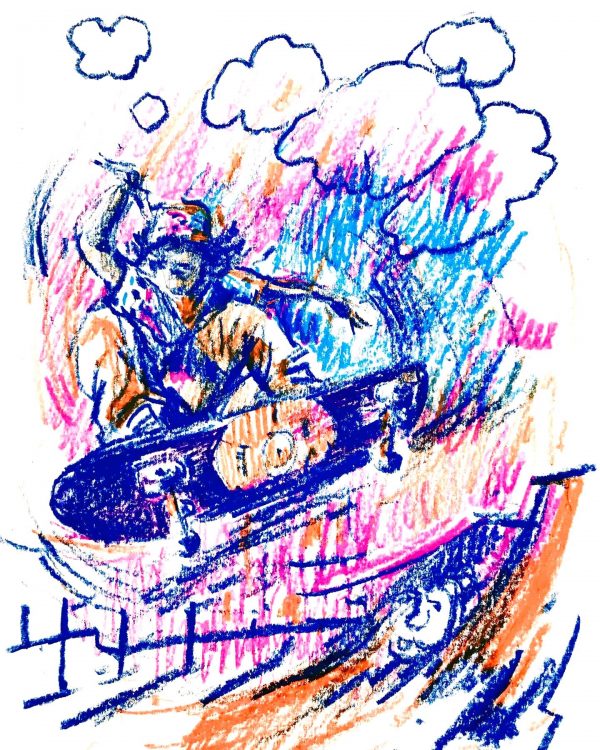 In my sleepy part of suburban Britain, there were no big seas, beach parties, Vans deck shoes or long, sun-kissed manes of hair extending our presence. I was skint and improvised by bolting a roller skate to a plank of wood. My second deck wasn’t much better, and I walked past our local skate shop in envy of the slick set ups, Indie trucks ply maple decks, rad pads in every hue and Kryptonic wheels, all of which cost more than a week’s wages!

We ramped old bits of wood on bricks and sought out banked, tarmac car parks; we were forever being chased by the police too, not because we had done anything wrong, but simply because we were there, unknown, feral yet focused, but utterly harmless. Our heroes were scrutinised in detail for every move, every mannerism and every T-shirt logo: Jay Adams, Stacy Peralta, Tony Alva- the Z-Boys were to us, the gods and we worshipped at their grinding altars. 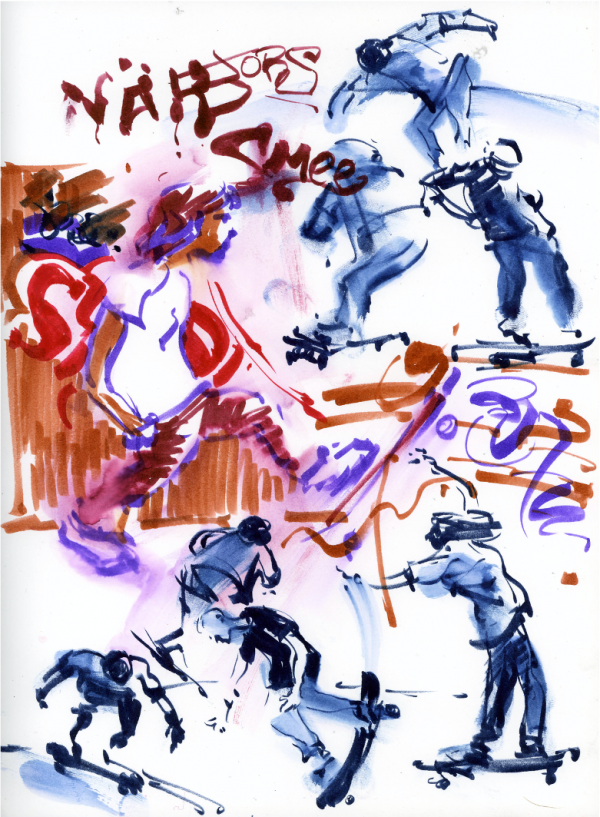 Hungry to escape life in mundane 70s Britain, we lived every moment, as a dream, through Skateboard magazine, marvelling, their hot, blue-sky world, as they effortlessly dropped-in on drained swimming pools, pushed up to the tiles, then the coping, then air!

Concrete skateparks were quickly established (and at great expense) to get youths off the street, and I joined a pool-riding team called Powerdrift. We frequented London’s Southbank (its paved ramps at that time were graffiti-clean), and a rad, converted cinema on London’s Old Kent Road, called The Mad Dog Bowl. Riding goofy, I added oldschool tricks to my increasing repertoire- endless ‘360s’, ‘hippie jumps’, ‘powerslides’ and the elegant, ‘daffy’.

The oldest member of Powerdrift was its originator and boss. He seemed much older, and although only in his mid-twenties, to us as ancient as Rome! A willing entrepreneur, Brian-John (BJ for short), was the one who helped make our West-Coast dreams come true. A crew of six, we used to pile into the boot of his black and white, two-tone Ford Escort Estate, Mark 2, with not a safety-belt in sight, not a care in the world. The world woke up to fresh adventures on the weekend. We’d get the phone call from the boss, and by lunchtime we’d be speeding off through urban Britain, very much in the manner and spirit of U.S. beat poet, Thom Gunn’s words, ‘direction, where the tyres press.’ 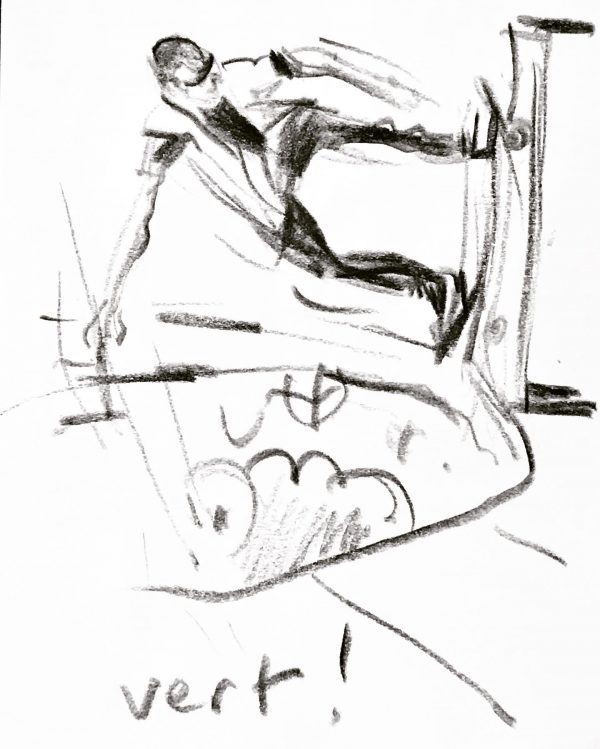 BJ had a day job too. He loved to be flash, ahead of the game, and set up a company selling skate gear. He imported Tracker Trucks, compound wheels and hand-made decks  from America and sold them in the UK for big profits- an innovator of product reselling. The proceeds were then reinvested in projects where BJ confidently developed his own branded versions of ‘camber’ decks, polyurethane wheels, and fibreglass decks. He believed we should all ‘feel the ride’, and it wasn’t long before ‘Glo-speeder’ boards and Bones Freestyle replica wheels hit the market.

Each Powerdrift team skater was duty-bound to test the products and we took it in turns to loosen the wide trucks and pump his G&S Fibreflex cutaway rip-offs through slalom cones, on the steep, straight, downhill runs of London’s Greenwich Park. Impromptu slalom competitions took place every weekend in the park- team ‘friendlies’ gaining no greater prize than learning daring feats of balance and counter-balance at breath taking speed. One really bad downhill slam left me scarred on my left hip….I’m reminded every day when I take a shower of those heady, carefree times and my desire to create the illusions of speed and motion in drawings undoubtably stem from these experiences. 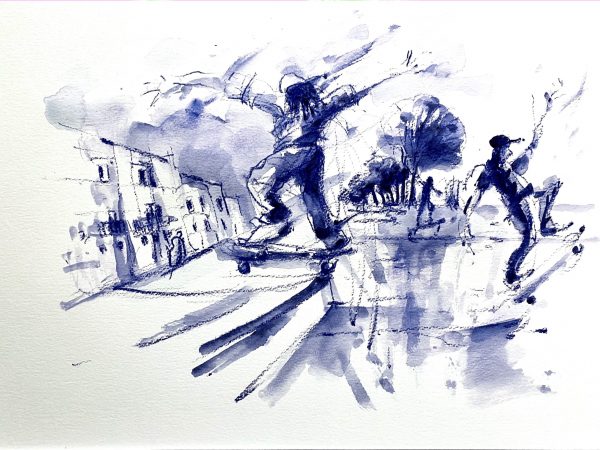 By the 80s I had moved on, became a competitive, dance, rink skater and with my partner, we represented Great Britain. Then needing to consider my future, I went to artschool, where I rode a Vision pool-rider as transport around my new home, the legendary ‘Pig City’ Brighton. I trained to be a graphic designer and illustrator, and thirty or so years on, I still enjoy a successful career as a reportage illustrator, university lecturer, performer, journalist and longboarder! The early days were decisive, they made me what I am, opened my eyes to culture, music, innovation and creativity. The media were always hot on the kicktails of this latest craze to sweep the streets, said it would never last, that kids would quickly get bored. How little they knew it would become as ubiquitous as breathing. 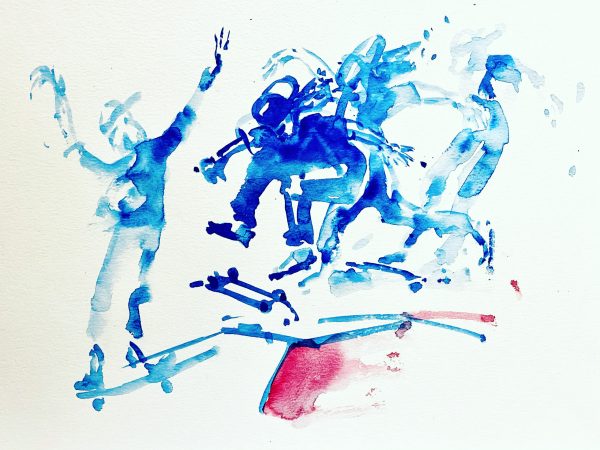 Over 40 years on, nothing gives me more joy than observing and drawing the current scene, and the memories it evokes are strong and deeply ingrained. I am blessed that my son, Noah Tappenden (Instagram: @saggynoah) is a talented, sponsored skater in Brighton. He is making a name for himself on the International scene and appears in some of these drawings.

I finally bought my first Vans in the early 2000s- they replaced the cheap, marine deck shoes which had kept my feet firmly planted, although I had been given some old converse boots, now highly desirable- being ‘originals’ made in the USA. One thing that has never changed across the span of my skating life…. the fruity smell of grip tape….and here I go again!!!… more memories are raised…

Enjoy these rapidly sketched ‘grabs’, capturing I hope, aspects of the gnarly, the boned and the bailed, as they have snapped before my eyes. My reportage is urgent and essential, it is all about capturing the moment and communicating its vitality. 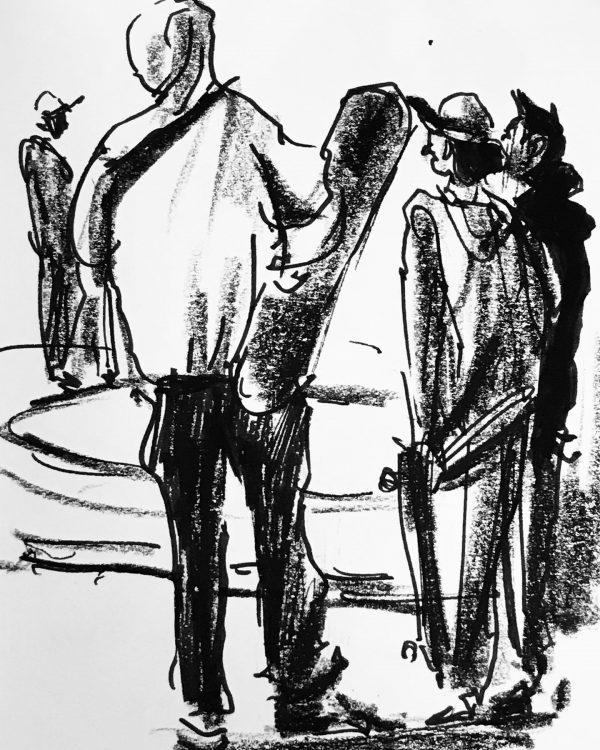 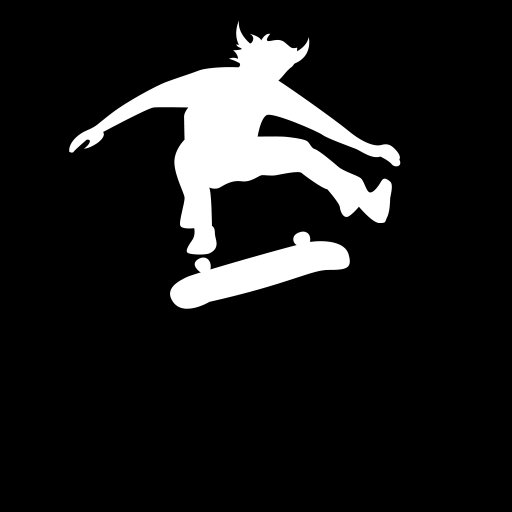